What President Eisenhower Can Teach us About Prioritization

The Eisenhower Method, also known as Eisenhower Box, is a method used to organize duties and tasks in order to figure out priorities. The Eisenhower Matrix on the other hand is today’s implementation of its philosophy so you can actually prioritize. Modern software tools, such as Priority Matrix, an Eisenhower Matrix app, which have existed more than a decade, enables individuals to easily prioritize tasks. Over time, these solutions have evolved to help executives, managers, and entire organizations stay aligned, not to fight wars, but to build successful businesses and organizations.

President Dwight D. Eisenhower stayed extremely busy as the 34th U.S. President, both commanding the Allied Forces during WWII and managing his duties as a decorated five-star general. It takes impressive organizational skills to succeed at just one of these positions, not to mention all three. Wondering how he did it? He used what’s is now known as the Eisenhower Method .

Let’s dive deeper to learn how to implement the Eisenhower Method in your life!

The Eisenhower Method of prioritization

The Eisenhower Matrix is a simple prioritization method designed to help you organize a list of tasks according to their urgency and importance. Simply using this layout makes you think about urgency and importance as two separate concepts, often in conflict with one another. Here’s a primer on why it’s important to prioritize.

To stay on top of things, Eisenhower quickly determined what needed to be done first and focused on those items which he deemed most pressing. He had a saying: “I have two kinds of problems, the urgent and the important. What is important is seldom urgent, and what is urgent is seldom important.” With this philosophy in mind, he divided a napkin into four categories and assigned tasks to each category: 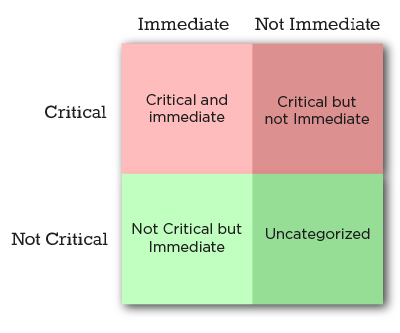 What are the 2 axes in the Eisenhower Box?

So what’s the difference between important and urgent (or Critical and “Do Now” as we prefer to call them)? Critical tasks are those that get you to your goal and contribute to the long run. “Do Now” indicates a pressing deadline, or time-sensitive nature of the task. Here are some examples of how this fits into a time management scheme.

What is the Eisenhower Matrix?

While President Eisenhower may or may not have practiced using a matrix to categorize his priorities, the Eisenhower Matrix is a modern take for managers to practice putting their priorities in perspective. As often attributed to Peter Drucker, “You can’t improve what you don’t measure”, we can make the statement “You can’t focus on what you don’t prioritize”. The Eisenhower Matrix FORCES users to put tasks in buckets. If your tasks are in a list — what do you focus on? The top? The bottom? The middle? By breaking up these tasks into the Eisenhower Matrix buckets, you force yourself to make the hard decisions on what’s really important.

What’s important to recognize is that we need to be able to separate the wheat from the chaff. If everything was important, then nothing is important. If everything was urgent, then nothing is urgent. There’s many other names for this method. Over time, authors have adopted similar 4-quadrants approach and slapped on their own names. In particular, the urgent-important matrix uses the similar but but the naming convention is different.

Learn more about how to use this 4-quadrant system to manage your time.

Eisenhower may have jotted notes on a napkin, and maybe you like to work on paper, too, but for efficiency-sake, there’s an app for that. If you have 10 personal things to do, you can easily create a paper-napkin version of the matrix. Where it gets tricky, and when the paper Eisenhower Matrix doesn’t work is when:

Priority Matrix is a leading Eisenhower Matrix app solution to put the Eisenhower Method philosophy into practice on both a personal and organization level. Priority Matrix’s unique feature lets you do exactly what is said here as you can completely customize your organize method. Furthermore, you to put more emphasis (or screen space) to the more important tasks! Priority Matrix happens to also be the most integrated Microsoft Office 365 solution for tasks and project management for Microsoft Teams and email prioritization for Outlook that works for both individual executives as well as entire global organizations. There’s also the Eisenhower Matrix HIPAA and Government solutions.

Along with adhering to the Eisenhower, Priority Matrix provides functionality to:

Let’s hope you don’t fight a war, but if you find yourself needing to ruthlessly prioritize, this article has helped you figure a way to do it!

Have dozens of tools but still struggle with staying aligned with your team, or staying on top of emails, or spending all your time shuffling priorities? Priority Matrix uses 4-quadrants to help you focus on top priorities and projects. When you use Priority Matrix, you become more effective and ensure that you are spending time where it matters most. Learn more about Priority Matrix.

Our Most Popular Posts